Neale & Newman, L.L.P.’s story began over a hundred years ago, when Ben Neale and Charles Newman formed a law partnership in Greenfield, Missouri.

The two founders of Neale & Newman each brought a unique background to the firm. Mr. Neale had graduated from the University of Missouri School of Law in 1902, an impressive fact considering at the time many lawyers “read law” in a lawyer’s office rather than attend law school. However, the firm was not lacking in tradition, as Mr. Newman received his law education in the then traditional manner. Mr. Newman was educated by reading law in the office of an old-time Greenfield attorney, Mr. Mace Talbut. Once Mr. Newman had finished his education with Mr. Talbut, he received his license on the approval of local lawyers. To receive this approval, Mr. Newman took a public oral examination on the first night of the fall term of court, as at the time there was no written bar examination. Both Mr. Neale and Mr. Newman’s unique education backgrounds were essential to the success of the partnership. 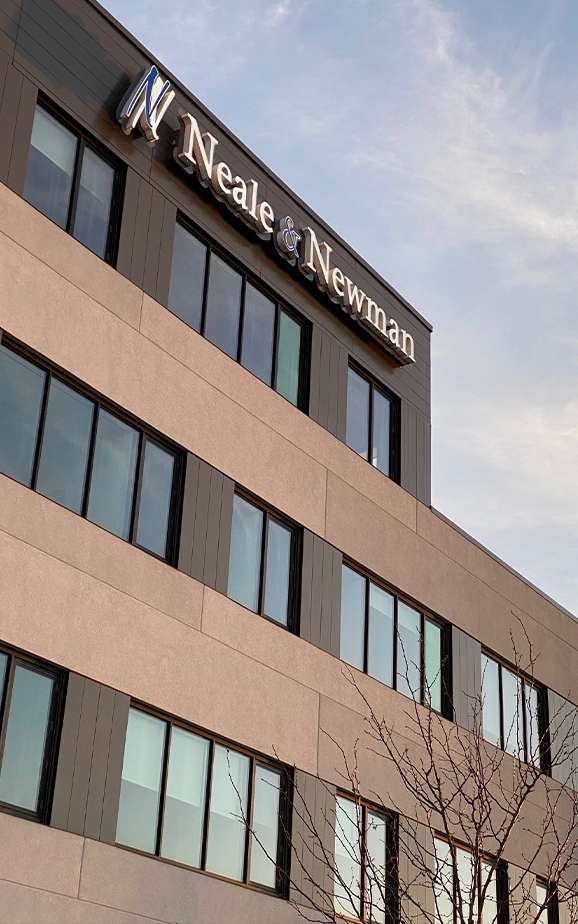 The partnership between Mr. Neale and Mr. Newman experienced a brief hiatus, when Mr. Newman left to join the Frisco Railroad in 1923 as a valuation attorney. The hiatus did not last long, as it was only two years later that Mr. Newman rejoined Mr. Neale. During that two year period, Mr. Neale had opened an office in Springfield, Missouri, located in the Landers Building. At the time of Mr. Newman’s return the office was moved to the Woodruff Building. Mr. Neale and Mr. Newman continued to maintain the Greenfield office, with one of the attorney’s visiting at least once a week, until World War II.

The firm continued to grow, with the addition of Mr. Neale’s son, Harry G. Neale, and Flavius B. Freeman on January 1, 1936. Mr. Harry G. Neale had followed in his father’s footsteps and graduated from the University of Missouri School of Law in 1931. He brought strong real estate law experience to the firm, as he had previously spent three years as a regional attorney for the federal government’s Home Owner’s Loan Corporation, which made many loans during the Great Depression.

In 1940, the name of the firm became Neale, Newman, Neale & Freeman. A decade after the name change, on January 1, 1951, Mr. Jean Paul Bradshaw joined the firm. Mr. Bradshaw, a 1929 graduate of the University of Missouri School of Law, had been a State Highway Commission attorney for six years. After his time at the State Highway department, Mr. Bradshaw had built a successful private practice in Lebanon, Missouri. Upon his arrival to the firm, the name changed to Neale, Newman, Bradshaw, Freeman & Neale. Mr. Bradshaw was prominent in Republican politics, and was once a candidate for Governor of Missouri and later the United States Senate. In 1970, Mr. Bradshaw passed away.

Mr. Bradshaw’s son, Paul L. Bradshaw, joined the firm in 1956. Previously he had served two years as a judge advocate in the United States Air Force. Mr. Paul Bradshaw was one of the premier attorneys in Southwest Missouri. He was a Fellow of the American Bar Foundation. He also followed his father into politics and was a highly respected State Senator. Mr. Paul Bradshaw was a partner with the firm until he died in 1986.

Following the deaths of Mr. Neale in 1966 and Mr. Newman in 1968, Harry G. Neale retired from practice to become president of what was known as the Safety Federal Savings & Loan in Springfield. The firm name then became Neale, Newman, Bradshaw, & Freeman.

During the last 115 years, attorneys of the firm have devoted a substantial amount of time to politics, bar association work, and civic and educational activities. Mr. Ben M. Neale was chairman of the Missouri Democratic Party during the presidency of Woodrow Wilson. Alongside Mr. Freeman, Mr. Ben Neale and Mr. Newman were Green County Democratic chairmen, and all three men were also president of the Greene County Bar Association at different times. Mr. Paul L. Bradshaw was the Greene County Republican chairman from 1965 to 1970. During his last six years as a State Senator, Mr. Paul L. Bradshaw was the Republican leader in the Senate.

With the passage of time comes change, and this is true for the firm as well. The firm stayed in the Woodruff Building for more than 55 years, until it was moved to the present offices in One Corporate Centre in July of 1981. As of January 1, 1997, the Firm shortened its name to Neale & Newman, L.L.P. which is still the name of the Firm to this day. Neale & Newman, L.L.P has continued to be considered a distinguished law firm. The Firm has grown during its lifetime to include the practice of virtually all areas of law.

The firm has been honored to serve as counsel to many prominent individuals, as well as corporate counsel to major public corporations including Ozark Air Lines, Inc. and Trans World Airlines, Inc. The firm is home to more than 15 attorneys, who provide representation for many different areas of law.

Neale and Newman, L.L.P. continues to grow and change as it has for over a century. However, even with the changes of time the foundation of the firm has not changed. The attorneys of Neale & Newman, L.L.P. are committed to helping their community, as they continue to adhere to the values of the founders.

The law firm of Neale & Newman, L.L.P. remembers its past as it looks to the future. We hope to continue to serve our community for years to come.

“We also appreciate all Neale & Newman staff do to support our community.”